For many years now, we have closely watched the little company formed from Major League Baseball (now BAMTech), a company that has since been spun out of the MLB to become the most prominent video enabler of the entertainment space. Yesterday, Disney announced that it would invest another $1.58 billion (on top of its initial $1 billion) to increase its ownership of BAMTech to 75%. It would be extremely wise for real estate brokerages and brands to commit to understanding why...

Like companies in the business of transacting real estate, television and movie companies have for the most part only had two choices in regards to reaching consumers: get to them via bundled aggregators such as Netflix, Amazon and YouTube or bring customers to their turf by building (in-house), partnering or buying (M&A). For those attempting to go direct to consumers, BAMTech (like WellcomeMat in real estate) is far and away the leading video enabler, powering the direct-to-consumer offerings of MLB, HBO, NHL, WWE and Disney/ESPN.

Let’s plainly state a few things about the business side of real estate video:

Without parent-level administration over their company's video accounts, many brands have allowed large scale fragmentation to occur with video content, eliminating their ability to gather agent and broker content in an organized fashion. Without centralization and proper categorization of a video library, these companies are at a massive disadvantage that grows larger every day:

By removing their content from Netflix and buying a controlling stake in BAMTech, Disney made a more drastic choice than most real estate groups need to make. They pay hard earned money for every new show or movie they create, a problem real estate brands mostly do not have. But, as more and more real estate aggregators get smart to the powers of video--positioning themselves as Netflix has but focused on real estate--those without a centralized, video mission control center will, without any question, lose their ability to leverage the most powerful content asset on the planet (video).

Disney's move to take a majority stake in BAMTech is fascinating! In its least valuable form, this strikes me as a insurance policy against aggregators. If they do, as they hope, monetize their content better on their own sites than they can via Netflix and others, awesome! If they don't and end up wanting to distribute their content to Netflix later, Netflix will surely have open arms. But, with BAMTech, Disney has so much more leverage in content negotiations.

The real estate industry has largely slept at the wheel with video but it can't continue to do so. With companies like Redfin chipping away at incumbents under the umbrella of innovation and technology companies waking up to what large video libraries mean for them/consumers, brokers and brands must make a choice to a) place themselves in a position to build traffic, audience and engagement on their sites, b) reach consumers on aggregator sites/platforms only, or c) do both. In the end, we can say one thing for Disney: they chose well!

On a lighter note: 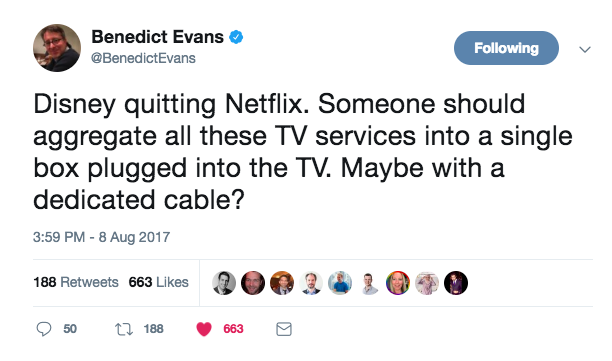 Save time.
Save money.